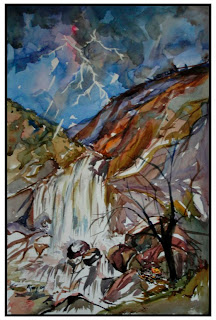 Few weeks back one of my friend sent me following scrap on Orkut and asked if I could make painting on those lines.
The Real Meaning of Peace
____________________
"There once was a king who offered a prize to the artist who would paint the best picture of peace. Many artists tried. The king looked at all the pictures. But there were only two he really liked, and he had to choose between them. One picture was of a calm lake. The lake was a perfect mirror for peaceful towering mountains all around it. Overhead was a blue sky with fluffy white clouds. All who saw this picture thought that it was a perfect picture of peace. The other picture had mountains, too. But these were rugged and bare. Above was an angry sky, from which rain fell and in which lightning played. Down the side of the mountain tumbled a foaming waterfall. This did not look peaceful at all.But when the king looked closely, he saw behind the waterfall a tiny bush growing in a crack in the rock. In the bush a mother bird had built her nest. There, in the midst of the rush of angry water, sat the mother bird on her nest - in perfect peace. Which picture do you think won the prize? The king chose the second picture. Do you know why? "Because," explained the king, "peace does not mean to be in a place where there is no noise, trouble, or hard work. Peace means to be in the midst of all those things and still be calm in your heart. That is the real meaning of peace."
Ask was sort of illustration which I had never tried before and was not sure about the outcome. She liked the painting and hope you guys will.
-
Posted by Ajay Patil at 9:01 PM 9 comments: 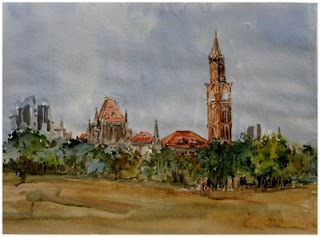 This is Rajabai Tower view from oval ground. Rajabai clock tower is heritage building and its part of Mumbai university campus ( Now university has two campus so this is part of old fort area campus).This building houses university Library .
Posted by Ajay Patil at 7:01 PM 2 comments: 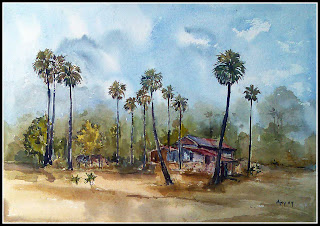 For last 4 to 5 years I had a photography project in mind and I had named it project NH8(National Highway 8). From Mumbai my village is about 90 KMs distance and I drive on this NH8 highway atleast once a month. On this way there are creecks ,one rivers and forests range.This area is beutiful especially during mansoon. I had decided to do photography of all these locations and identified spots too but never clicked a single frame all these years and don't see doing that in future. Instead I painted this one last Sunday on one of those identified locations. Also this happens to be my first full imperial size painting done on the location as against my regular half imperial size paintings. It was jsut to test if I can complete full size painting and I was able to finish this one in about one and half hours
Posted by Ajay Patil at 6:13 PM 3 comments:

Same spot as of my last post. Bit tighter composition and experimented to levae out gate structure white.Hope it has worked.
Posted by Ajay Patil at 7:33 PM 6 comments: 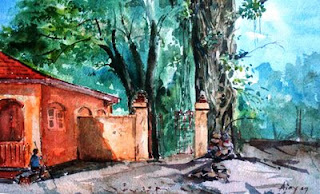 After posting paintings done from reference photos this one is again plein air.I enjoy plein air more than doing from reference.
Posted by Ajay Patil at 1:57 AM 2 comments:

Normally we associate Mustard fields ( Sarson ke khet ) with Punjab as we see in most bollywood movies. These actors keep running , singing and dancing in those fields. However this is done from photograph I had taken on the way to Pehlgam, Kashmir.Painted in very bold maases, I should have avoided some whites which very not left intentionally
Posted by Ajay Patil at 7:37 AM 3 comments: